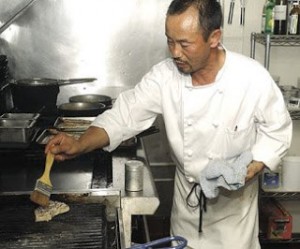 Soo Song is the executive chef and owner of Main Street Bar and Grill located in historic downtown Suisun. The Appetizers and desserts are prepared by his wife and business partner Min Song.

Mr. Song is a familiar face, having owned the Old Post Office Seafood & Grill in Vacaville. He sold that restaurant in 2007.

“This is more upscale. It’s a different atmosphere,” he said of the new restaurant compared to the Vacaville location

He purchased Main Street Bar and Grills location and spent three months remodeling it before it opened in May 2007.

His cuisine is a California Cuisine

The menu also includes dishes, like rack of lamb, not often found in area restaurants. Song also offers specials like a duck breast in a rosemary marinade and venison and rabbit.

Diners are welcome to leave their phone number and Song will call them when he makes the above dishes.

Desserts include chocolate mousse, Tiramasu and many more delicious dishes.

He’s been in the restaurant business almost 30 years. Right now, he said, his heart belongs in Suisun City, in the 130-year-old building with a historic and full bar, with its own menu.